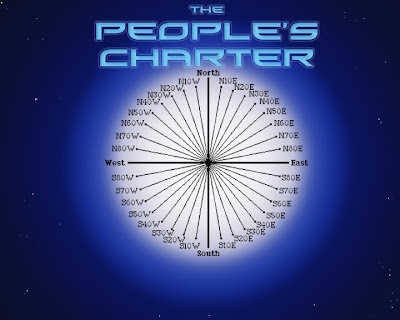 Use your voice to make a degree of difference

To us it would Initially seems that a majority citizens of Great Britain would have to agree to the first three underlying principles of the People's charter in order to facilitate and endorse the remaining 23 points
All points raised are evaluations and are open to dialogue, suggestions, and additions
also in what order they should be placed.

To us the major issues that would need to be addressed first in order to allow the following, is that of transparency & accountability

1. The common law of the land apply within parliament with a fully transparent and a just system favouring democracy of the people, whereby the government and police are held to account for their actions against the people.


2. That members of parliament appointed and acting on behalf of the people shall have no other vested interest other than that of the people.

4. An end to unlawful wars.


5. Banks return all bonus money and immediately return monies borrowed from the public purse. Further to this all people's monies will be restored to people's banks, with the power to control money being put back into the hands of the people.


6. That all Mp's pay back their expenses claims, any members who are shown to have claimed more than 10,000 in any one year will be sacked unless just cause can be shown as to why it was so excessive.

7. That banks stop operating as high profit businesses, and stop investing in non sustainable assets. Furthermore that 50% of their gross profits will be directly reinvested to benefit all people and the environment.

10. All taxes that are raised from petrol and diesel will be invested in renewable energy.


11. All taxes raised from motorists will be used to invest in cheap affordable green transport.

12. Where public monies are spent, or public assets are sold, full and transparent consultation will take place with the people and in favour of the people's needs and wishes.

13. That all future investments of public funds will be for the benefit of all people and the environment.


18. That all businesses with a gross profit exceeding 1 million pounds must show that the rest is invested in sustainable growth, or given to the treasury to be reinvested in the country.


19. That all revenues taken in taxes will be just and fair, furthermore that these taxes will be used to benefit all people and the environment.


20. Investment and a realistic holistic approach to all self sustainable environmental innovations and practices.


25. All industry becomes green, investing in sustainable holistic practices including green energy, methods in sourcing, production and the recycling products from start to finish.


We as free people must not pull back from seeking the truth and consistency in any plans concerning our race, the planet and its species.
If we look at the world, we are all sharing it as the whole, the one, and, at present, there is no other.
The bottom line is, you cannot get off.

It is each and everyone's responsibility to ensure that industry, Governments and corporate's do not destroy the environment and species any more.
There are no excuses for the wanton destruction of the planet, it's species and habitats to date.

You/we/I have only to look to see the massive environmental damage that big companies and governments have already created with their insatiable greed and their need for cash, control of people, energy and resources.
The truth is they must be stopped from destroying any further.

Alternative energy is not a fantasy, there is an inexhaustible amount of information readily available.
Conservation of energy must also be fully realized, utilized and practiced.
Do not be fooled into thinking bio fuels, or hydro electric dams are an answer.
They serve no sustainable purpose, resulting once again in the destruction of habitats and the displacement of wildlife and indigenous people's.

Nuclear power is a demon seed with nuclear waste having a half life of 25,000 years.
This means that it will still be 100% toxic to all forms of cellular life in 25,000 years time.
Chernobyl in Russia and Fukushima (a curse to catch attention) in Japan have shown that no nuclear power plants are 100% safe, and once an accident happens, the species and environmental impact is both far reaching and devastating.
Chernobyl and Fukushima must be taken as direct reasons for discontinuing the use of atomic energy,

People must pluck the sickness of greed and corruption from their Nations
You only get one chance, make that chance, one of a future for all People, species and planet.

People must expose and oppose tyrants, regimes and oppressors and those who commit crimes against peace, genocide, and ecocide. Everyone is on the same Planet, we need to acknowledge that we are also on the same page in our History and Future.

radfax
Sometime whilst you were sleeping on the dark side of Earth a mysterious craft entered the atmosphere. There are reports that the occupants of this craft have uploaded and are streaming hardwire information onto the mainframe network of the world. The F.S.I has been trying to delete this information from the network systems before it reaches the public domain. When we questioned the K.D.F.S regarding this incident they said they had no comment. We can however reveal today that this hardwire information has some very unusual properties, certain information, frequencies and lines embedded within it's signal can lead to the self Other properties of this signal are not fully understood though it is said that it has the ability to create links into self awareness and self empowerment within humans. Due to the sensitivity of this information and it's implications we feel it is our duty to make you aware of this recent development. Further to this we add that people who are experiencing "FUTURE SHOCK" or "SYSTEM SHOCK REALITY” may find something within the signal that will let them know they are not alone.